a lesson from the ant hill 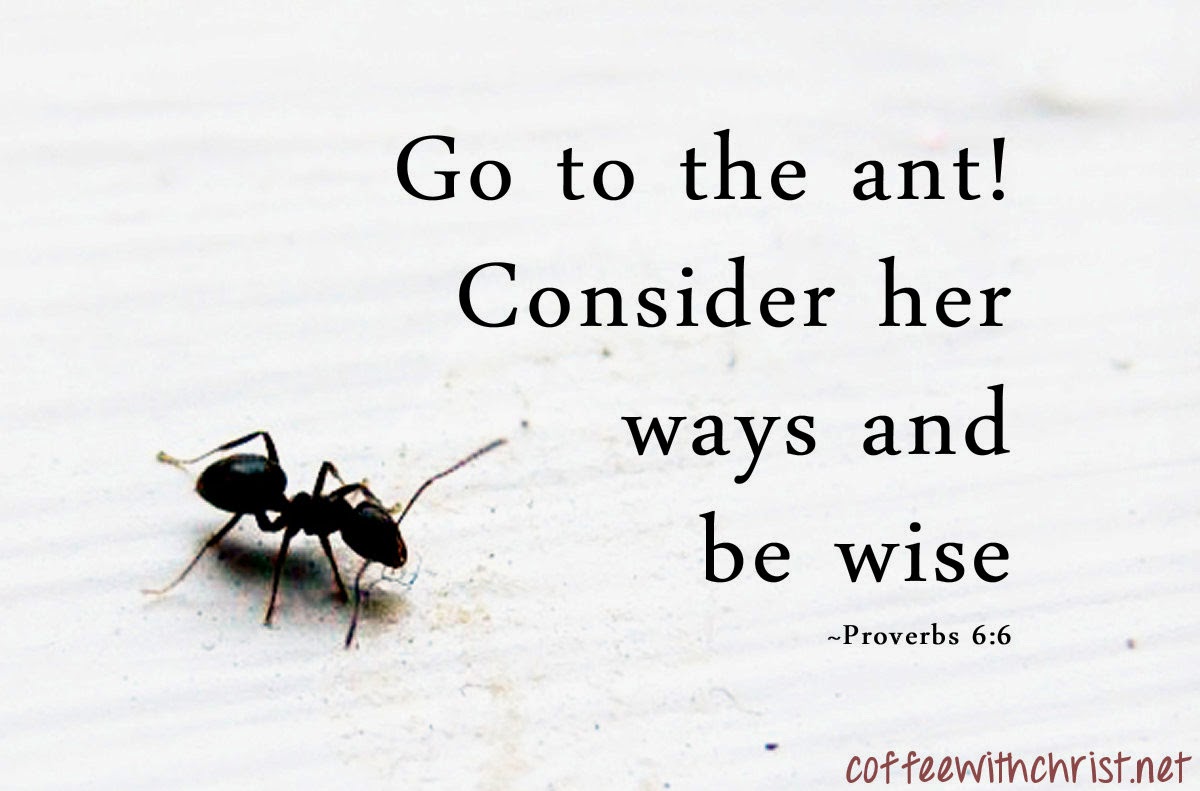 I have to admit, my first instinct when I see an ant is not to consider it.  And I would have never thought that doing so would make me wise!
After all, these are those annoying little creatures that seem to somehow find their way into my kitchen in the summer.  When I dig in my flower pots to add my annuals every year I am attacked by hundreds of them for disturbing their home.  These are NOT my favorite insect - butterflies, dragonflies, even some of the beetles - those I would be happy to consider.  But I trust in God's word and when I came across this verse with my daughter, we did, indeed, stop and consider the ant....and we were amazed!

This creature lives with approximately 4,000 other ants and yet they all manage to get along, knowing what their job is and doing it to support the colony, much like we are called to do as Christians.  A lot can be learned just by studying the colony in relation to how we should treat our brothers and sisters in Christ, but that isn't what I "considered".  Instead I was drawn to the relationship between the ant and the aphid.

An aphid is an annoying little insect for farmers that can decimate a crop.  Farmers often purchase and release ladybugs (the aphid's natural predator) in an effort to control them.  One particular ant species, the honey ant, has a different relationship with it.  This ant cares for the aphids.  The ant will protect the aphid from the ladybugs, bring the aphid into the nest to protect them from the cold.  It cares for the aphid young, moves the aphids to good food sources and otherwise betters the lives of the aphids, all in exchange for the honeydew that the aphid produces.

What if we are called to be like the ants and the aphids are the lost in the world?  Both species can survive without the other, but what the ant can do is make the aphids life so much better.  The ant guides the aphids to all the best sources of "food", much as we are called to share the true bread of life with the world. (John 6:35)  Granted, the aphids can locate their own sources of food, much as the lost can attempt to fill up on the things of this world.  But with the help of the ant, the aphids are delivered to the best source, the one that will be the most nourishing.  It is so easy for us as Christians to shut the church door and allow the world to do its own thing.  It isn't easy to convince the lost that what they really need is Jesus when the world seems to meet their needs.  So many of us are content to just leave a tract in the bathroom and say we have done our part.  But the ant devotes its life to caring not only for those in its colony, but for these aphids as well.

The ant defends the aphids from the enemy, much as our prayer can protect the lost from the real Enemy. (Ezekiel 22:30) Do you pray for the lost that you know?  Not just a simple, passing, "Lord, help them" prayer, but truly pray from the heart.  The Bible tells us that our battle isn't physical but spiritual.  (Ephesians 6:12)  The lost in the world are not our enemy, rather they are deceived and led astray.  We can't pray them into salvation, but we can pray for the Enemies lies, traps, and deceptions to be removed so that the lost can see the Truth.

The ants bring the aphids in to shelter, much as we can lead the lost into God's shelter. (Psalm 46:1) God longs to see all people under His protection.  When we share who He is, what He has done for them, we are leading them to the shelter of the Lord.

And what is our "honeydew"?  Our inheritance in Heaven.  Colossians 3:23-24 tells us that whatever you do, work heartily,as for the Lord and not for men, knowing that from the Lord you will receive the inheritance as your reward.

I am amazed at the ways that God uses nature to point us to Him.  I shouldn't be though.  He told us in Romans 1:20 that it has been this way since the creation of the world so that we would be without excuse as to who He is.
Labels: consider the ant