I came across something I painted about 10 years ago while cleaning out some closets that really hit me.  A simple keepsake box.  It isn’t especially important, just a craft I did with several other preschool moms while our kids were in school one day, a time waster.  The box didn’t really hit me.  It is what I wrote on the front. 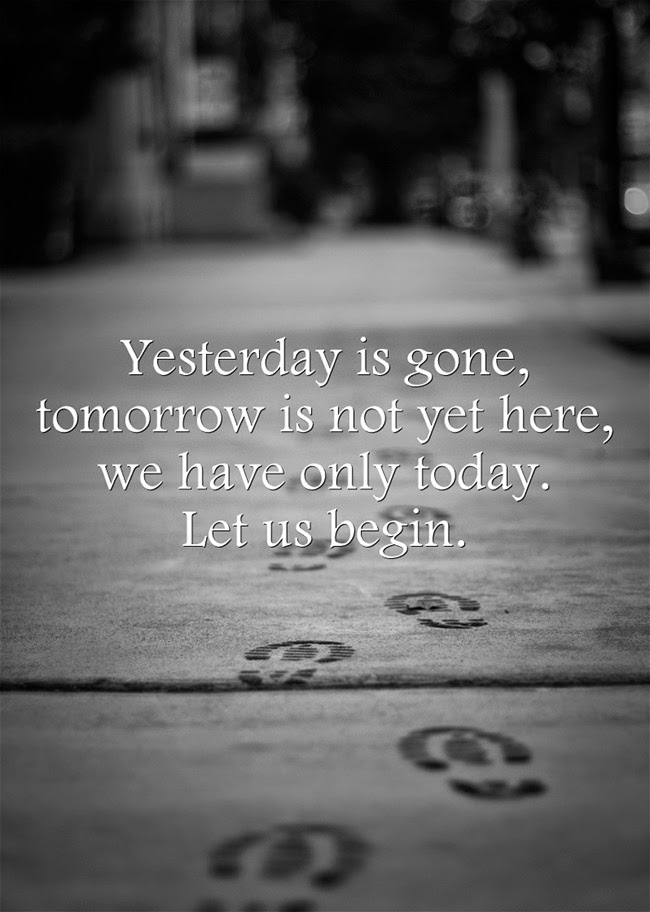 For many of us, me included, it is difficult to remember that today, this moment is what matters.  Not what has happened before or what may happen later, now.  It's hard for me to live in the moment.  I have a tendency to be haunted by my past at times, or to focus on what is to come (can't wait to meet You, Jesus!), but the present......I seem to overlook it to often.


For those of us focusing on the past, let me first say that there is a time and a place in which we should examine the past.  Romans 15:4 tells us - The things written in the past were written for our learning.  I believe this applies to the things written in the past of our lives as well.  We should not forget them, but learn from the things of our past.  However, we should not dwell there.  Had Jephthah held a grudge against his brothers in Judges  11 he would not have saved the people of Israel.  He had been one of the sons of Gilead, only his mother was a prostitute.  His brothers forced him away from his home to prevent him from gaining anything from the family.  When the Ammonites attacked Israel the elders came and begged him to not only return and fight as commander, but to lead the people as well. He returned, defeated the enemy and led for 6 years.   He isn’t the only one in the Bible who could sing the blues and yet had to let go of the past in order to do what was right.  Joseph did, David did, John did, Jesus did.  It seems to be a theme that people experience hardship before God uses them to do great things.  Are you hanging on to hurts?  Are you hanging on to fears that are a result of things from your past?   Are they preventing you from stepping out and doing what you have been called to do?  Rather than hang on to the hurt, let it go and learn from what has happened.  Allow God to use it to prepare you for what is going on NOW and for what is to come.


Not all of us are hanging on to past hurts though.  Some of us are still living in the past, wistfully wishing that things were now as they were then.  This can be very dangerous.  Look at Lot’s wife, a woman who enjoyed her life and was blessed to have a life she felt was good.  Her husband was prosperous, they had a sturdy home, she probably had a place of esteem among her neighbors.  Then she was told she had to give up everything and leave it behind.  She couldn’t do it.  Rather than look ahead of her as she was told to do, rather than looking to saving her life, she turned back.  She paid more attention to what she had before than what she was doing at that moment.  As a result she was turned to salt.  She became something that prevents future growth.  If we dwell on what was, on what we had rather than what we are doing NOW we can’t grow.  The time for what was past has gone.  We have learned that lesson and we need to move on.  Dwelling there won’t change what has happened.  Lot’s wife staring longingly at what she was leaving, at what her life had been, didn’t stop the destruction.  It didn’t change the fact that she no longer had that life.  It won’t change it for us either.  All it can do is cause us to become like salt, a place in which nothing can grow.

The biggest example of how destructive living in the land of “one day” can be is the Jewish nation today.  As a people they have spent thousands of years examining prophesy and looking for the Savior to come.  They have already decided what it would look like, and how it would happen in their version of “one day”.  However, because they have spent so much time and thought about what it would be, they missed what it was when it was happening.  They still miss the gift of Jesus today as they continue to live in their "one day" land.  When we are so focused on what will be, we easily miss the gift of what is.  We miss the beauty around us, we miss the opportunity to join in on what God is doing.  We miss the miracles He has for us.  Jesus went home to minister to his own town.  They were so stuck in "one day" thinking that they missed out on what Jesus had come to do for them.  They refused to see what He truly was.  How many times have we missed our miracle because we didn’t see it, so focused on our "one day"?  How might our present be different had we been living in the moment in our past?


Let us look at Mary and Martha, a story familiar to most of us.  Luke tells us that Jesus arrived at the home to visit and Mary sits with Jesus and talks with him.  Martha rushes about trying to make preparations, probably trying to scramble up enough to eat for Jesus and his disciples, find places for them all to sleep.  You can imagine everything that needed to be done when a group of unexpected guests show up at your house.  Martha was focusing on providing for the future.  Martha missed out on the present.  She invited them into her home, they didn’t seek her out or even show up uninvited.  However, Martha couldn’t take the time to live in the moment and be with her guests.  Instead she was stuck in “one day” mode and was more concerned with what happens next rather than now.  Jesus tells her, when she complains that Mary isn’t flitting about also, that Martha was worried and troubled about many things, but Mary had chosen the good thing (to be in the moment with Jesus) and that it would not be taken from her.  Jesus wasn’t about to take away Martha’s worries and troubles for the future, He knew what the future held.  Jesus only wanted Martha to be in the moment with Him, because they only had that moment at that time.  Mary and Martha became close friends with Jesus.  I hope that Martha heard what Jesus said to her and stopped fretting about later.  I hope she sat down with him.  The Bible doesn't tell us of her choice.  What we do know is that they must have spent some time together because in John chapter 11 we learn that Jesus loved both Martha and Mary.  How many relationships with family and friends have we missed out on or weakened because we were making preparations for later rather than being in the moment with them?  If we live for “one day” we miss today.


“ How can the guests of the bridegroom fast while he is with them? They cannot, so long as they have him with them.  But the time will come when the bridegroom will be taken from them, and on that day they will fast.”  In other words, the disciples were living in the moment.  There would come a time that fasting would be appropriate for them, but for now, they needed to do what they were doing, they needed to be in the present.  Do you think that God would have been honored or glorified any more had the disciples fasted rather than spend time with Christ?  No.  Had they been focused on anything other than their present they would have missed what it was God had for them to do.  Had they fasted without Christ it would have shown that they trusted tradition more than Jesus.

I am not saying that we don’t need to think about the future.  We do.  We need to put money aside for retirement, we need to make plans for our children’s future or for dinner later tonight even.  We need to look to the future, to the day Christ returns for us.  We need to learn from our past and prepare for our future, but LIVE now.  It is when our now becomes a less important than the past or the future that we have problems.  When our lives become entangled in the snare of the past or future that we stagnate.

Galatians 5:17  You have to live by what you KNOW, not by what the flesh feels.  I know that God will use the past for good (Romans 8:28) and that He has the future in His hands (Jeremiah 29:11).  The flesh tells you to worry about how the past is going to affect now, or to worry about how the future will turn out.  God tells us to not worry about those things because HE will take care of us.  When we focus on and worry about the past or the future WE AREN’T TRUSTING GOD.  Either we don’t believe that He can handle whatever life throws our way, that He doesn’t have plans for us, that He can’t overcome our mess ups and make them good, or that He just isn’t who He says He is.  Are you trusting Him?  Are you living in the moment?