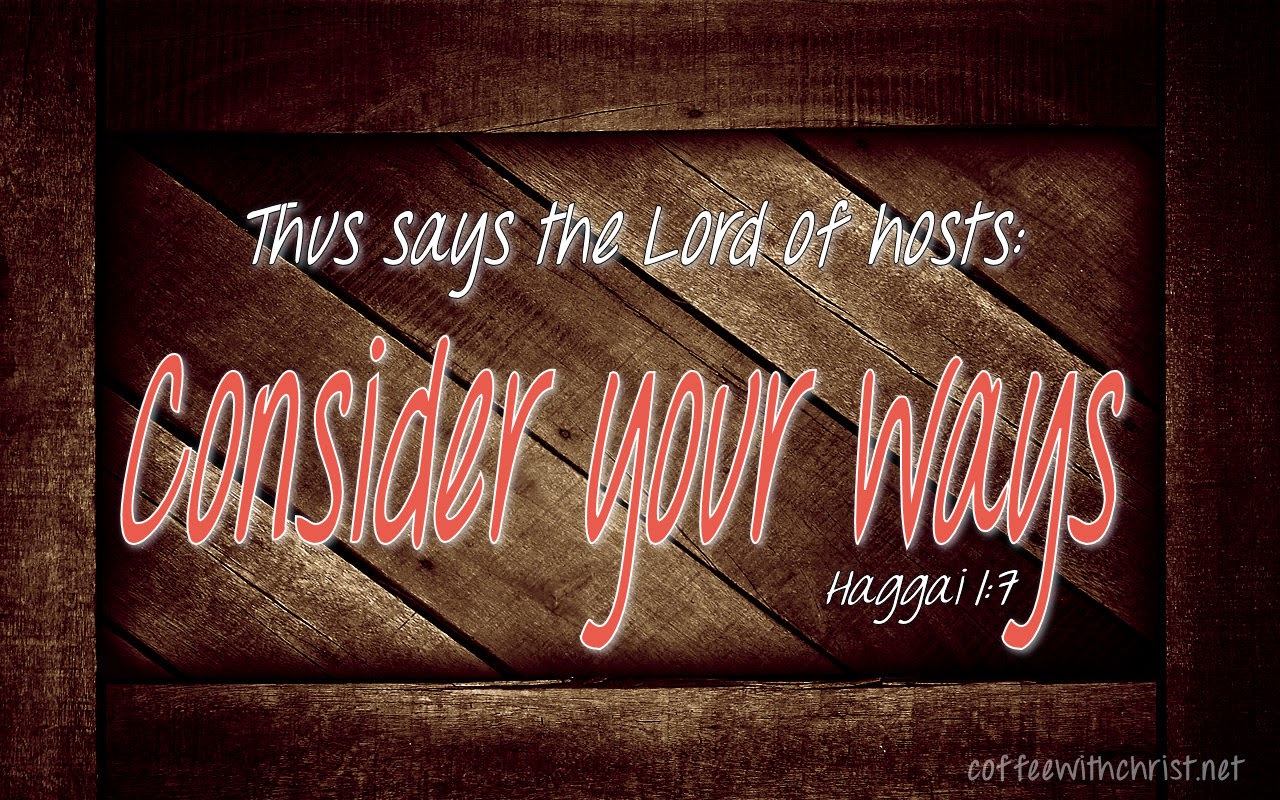 Ever had one of those days where every thing just seems to go wrong?  Your alarm doesn't go off, the coffee filter falls over and you end up with a carafe full of grounds (gasp!), can't find the car keys and when you finally do you realize that you are out of gas.  And that is just the beginning of the day!  I admit, I have had a few days like this this past week, and on those days it isn't easy staying true to Ephesians 4:29.  In my personal study time this week, God showed me something that made me step back and reevaluate.

I was reading Haggai, and I also must admit that I had to look up who this prophet was.  Apparently he was prophesying during a time in Jewish history that should have been wonderful for them.  They had been given a decree from the king, Cyrus, allowing them to return to Jerusalem and rebuild the temple.  All of the things that had been stolen from the temple had be promised to them upon its completion and the king agreed to finance the rebuilding.  What a sweet deal, right?

Only it came with some issues.  The retuning Jews were excited to be home again.  They set about building their homes, clearing their fields, building storehouses, etc.  They were going about their lives and taking care of their earthly business.  Haggai comes along and points out some truths that people had been overlooking.  God had opened the door for their return so they could rebuild the temple.  The temple is special, this is where God dwelt, where He could be close with His people.  Only His people were more concerned with doing their own thing than what they should have been doing.  Haggai tells them, "You have sown much, and harvested little. You eat, but you never have enough; you drink, but you never have your fill. You clothe yourselves, but no one is warm. And he who earns wages does so to put them into a bag with holes." (Haggai 1:6) And it hit me....

We aren't much different.  Oh, it is easy to read these stories in the Bible and shake our head in disbelief about how they are again not doing what they are supposed to.  To wonder how they seem to miss what seems so obvious to us as the reader.  But if you had to step back and read your own life story, don't you think you might have the same thoughts?  Now I'm not going to say that every time you don't get that raise at work, or your coffee gets some grounds in it that it is because you aren't following through on God's will, but I will say, perhaps you should stop and take a moment to consider the possibility.

You, yes YOU, have a purpose in God's plan.  Just as the Jews were called back to Jerusalem to build a place for God to dwell, you have a mission to create an inviting place for God to dwell - your heart.  As you work on cleaning out the debris, laying a good foundation, and building according to God's plans He will reveal more and more to you about what He is calling you to do.  And when you veer away, when you become more consumed with building earthly things rather than spiritual, you are in effect walking away from His blessings.  When you walk away, things start to fall apart...

So when things start to fall apart, consider your ways.... are you spending time in His word?  Are you spending time talking with Him?  Are you listening for Him?  Are you about His business?  If you can answer yes to these, then keep on the path you are on.  Push through the obstacles and know that they can only make you stronger.  But if you answered no, perhaps He is trying to reach you and help you to see the truth.