Hope in a Broken World 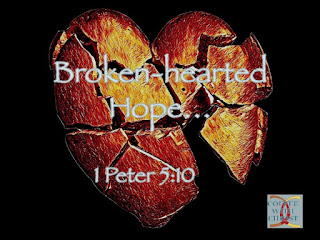 History is repeating itself in America similar to Judah/Israel being punished by God. Now I know we need to be careful not to assimilate what God said and did to and for Israel—His people—to other nations/people… BUT, I can’t help but think about how America was founded on biblical principles and morals, and many of the forefathers were Christians—making ‘us’ the new ‘favored’ people (one could simulate)… And if God was willing to punish Israel—His people—with such judgment, then what’s stopping Him from doing similar, or even worse, to ‘us’? On the flip side, God punished the nations that were evil. And so much of America’s cultural views have shifted directly to abhorrent disrespect and vagrant disobedience of God’s word (child sacrifice (abuse, pedophilia, trafficking, abortion), sexual sin (sex trafficking, homosexuality, pre- and extra- marital affairs), etc.). Regardless of which side of the fence we view America—you can’t argue that God is at work in judgment.

If you’ve studied anything about the End Times—you’ll notice nothing seems to fit where America is concerned. She’s not mentioned anywhere (or referenced in anything that could assimilate to the United States). Given the way our country encroaches in most modern wars and humanitarianism, it seems strange that ‘we’ would not be involved in the End Times, particularly since ‘we’ are such allies of Israel… I’m not saying we’re entering the last days (though I won’t deny that I personally believe we are)—but I’m saying that our being uninvolved could be because ‘we’ as a nation—the United States of America—could no longer exist (as we know it). God destroyed world superpowers like Assyria, Egypt and Babylon—and the people didn’t think it would happen because the countries were too powerful. This should serve as a warning that He could/would destroy America. Ezekiel 25-32 are God’s word regarding the surrounding nations of Judah. They are judgments on the nations that failed to acknowledge God and fulfill the purposes He intended for them. [Does anyone besides me see how this could so easily pertain to America?]

God rebukes His people constantly over their pride and worship of idols—anything that we put ahead of God (money, power, fame, hobbies, job, family, pleasure, etc.). Pursuing anything with more intensity or commitment over God is committing spiritual adultery. And it literally grieves Him (Isaiah 43:24, Ezekiel 6:9). This passage humanizes God to me. I know God is Sovereign over humans. But that can make Him seem distant to me at times. But this passage—it helps me understand Him. And it makes me want to please Him—not hurt Him. It breaks His heart—after all He has done, and continues to do for His people (both then and now)—that we continue to turn our backs on Him and pursue our own gratifications (assuming we know better). Our pride lacks giving God the credit and gratitude He deserves for the things we outrightly don’t deserve. His grace is inexplicable. His mercy is incomprehensible. Yet He gives both incomparable to us.

God gave His people messengers over and over (2 Chronicles 36:15-16), showing His great mercy and compassion. He sent them warnings for years. Through multiple people. But the people chose to ignore the warnings and even mocked the messages, and continued with their sins. And because of their sins, God punished them with sword, famine, pestilence (war, famine, disease) (Ezekiel 6:11-12). [Riots, poverty, COVID-19?]

But just as God gave His people—and their enemies—warnings, He followed them up with promises. [How awesome is it that God refused to turn His back on His people—even after they turned their back on Him!] He’s the same God ‘today’, as He was ‘yesterday’. His Book is His warnings. Perhaps even the current events around the nation and this world are continued warnings. But keep in mind that there’s hope. God’s promises continue. There was hope for the Israelites after He destroyed their land and sent them into exile; and there’s hope for us today. That same hope was/is Jesus Christ. The ultimate promise is that God’s people will receive the ultimate shower of blessings (Ezekiel 34:26)—salvation and eternity with Him. The Promised Land. He will overthrow all evil once and for all, making the world the perfect place He originally intended it to be.

All that is going on today is scary: the fact that COVID-19 doesn’t seem to be going anywhere any time soon; the riots and anarchy across our country; the economic hardships from both of these situations. And personally, just the overall hateful, hypocritical, self-righteousness that is so prevalent. Satan is working overtime to destroy the world that His Creator spoke into formation. [Did you catch that Satan has to physically work at destroying, when God merely had to speak it into existence?!] [I truly can’t get over how incredible our Creator is—and am humbled at His love for us—the only ‘thing’ He did create with physical exertion. We are His prized possession. And He will destroy everything around us to protect and preserve us. That is why He casts judgment. Not for wrath against those that don’t follow Him—but in love for those that do.] But fear not! Our Savior suffered far greater than what we are or will experience. His grief upon His death—His heart broke (Luke 22:44). BUT—He overcame. And so will we.